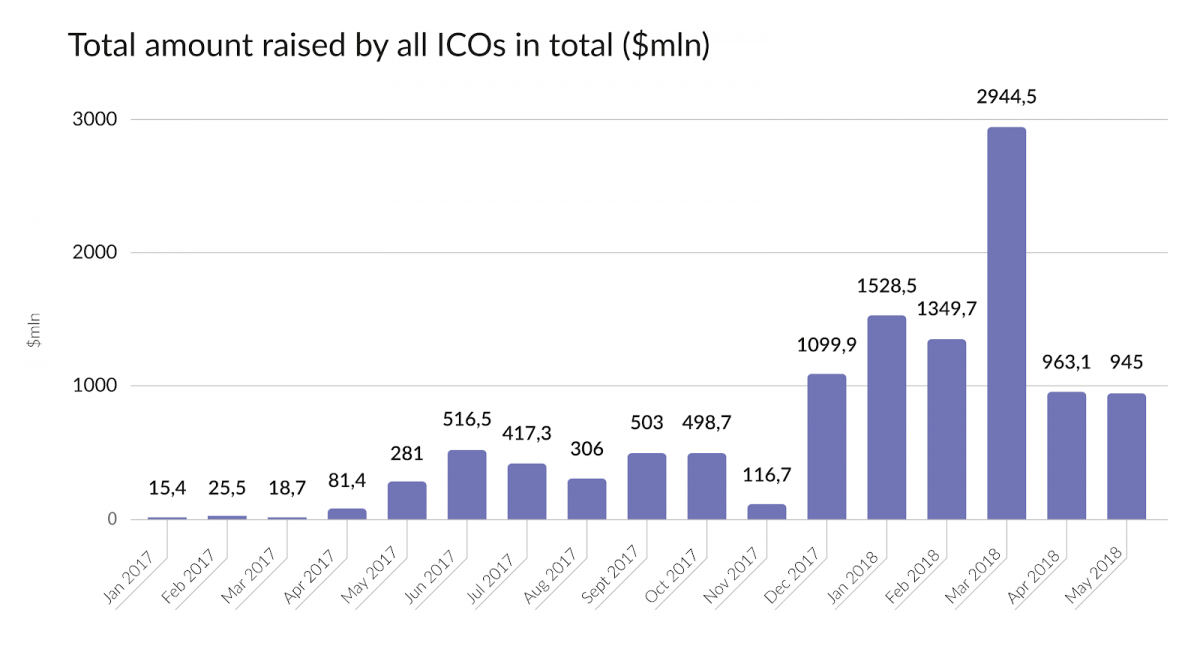 Stats on where ICOs are mostly coming from, and what they are mostly about, paint an interesting insight into the ecosystem. As does the data on how the ICO market has changed into 2018. The biggest month for ICO investment was just four months ago, and 2018 has also seen the time taken to complete and ICO, and success of these projects, shift significantly since 2017.

Around 1000 cryptocurrencies have been considered deceased recently. It was attached to Bitcoin’s drop in value and was hinting toward a total cryptocurrency bubble.

However, the cryptocurrency ecosystem is a little more complex than that, and one of the most interesting and staggering facets of it all has to do with the Initial Coin Offering (ICO) marketplace. It is seen as an area of cryptocurrency that is aimed at both disrupting traditional venture capitalism as well as expanding the broadness of cryptocurrency beyond that of just Bitcoin.

This rambunctious side of cryptocurrencies has a lot of telling statistics that are worth delving into — especially over the last 18 months, which have seen a massive boom in new coins as well as a steady growth in capital raised for new cryptocurrency projects.

ICOs are indeed a global phenomenon. However, some countries and markets have taken to them far better than others. In the latest trends, it is still the United States that leads the way, followed by Great Britain and Russia. When it comes to the sectors that these ICOs are targeting, it is unsurprising that  finance is at the top, due to the cryptocurrency nature of the projects. But what is surprising is that finance is not where the most money is going — that belongs to blockchain technology itself.

Finance comprises 13 percent of ICOs, then goes to payments/wallets with 6.6 percent, while third is commerce/retail at 6.3 percent.

Then, looking at token sale results based on funds raised, we can see a big chunk going to blockchain platforms with 38 percent, followed by network/communications at 16.6 percent and then Finance at 9.5 percent.

The evolving trends of ICOs in 2018

It would not be hard to estimate that a good time for ICOs would have been in 2017, especially toward the end of the year. Cryptocurrencies were the talk of the entire globe and interest in them was being picked up in terms of Google searches — as well as in the price of things like Bitcoin in what has been called a ‘Satoshi Cycle.’

This however did have a lot to do with two specific ICOs, the Telegram ICO — raising $1.8 billion in total, including $850 million in its second round of ICO on March 30 — as well as the Petro of Venezuela — which raised $5 billion with its presale beginning on February 20. However, the worrying trend with these ICOs and the money they are raising is that not enough of the projects are leading to success. ICOs have picked up a bad rap in recent times, with some major names hitting major difficulties — such as Tezos, which suffered a slew of lawsuits after infighting between the members shattered its progress.

This puts forward a very negative perception of the ICO space, and thus also flows over to other major cryptocurrencies and even blockchain technology itself. Much like the Dot Com bubble, businesses flocked to ICOs, but many found out that they were, perhaps, unnecessary for their projects. 2018 emerges, and the hype has somewhat died down. Regulations are also tightening up and more protection is being afforded to investors, but at the same time, project teams are getting a more powerful foothold for development.

Still though, ICOs — even with increased pressure from laws and regulations — are struggling to deliver on their promises in 2018, as they are held to more scrutiny.

In May 2018, there were 195 ongoing ICOs listed on ICObazaar that were planning to close sales. However, only 91 public sales were closed, with total of $2.57 billion raised. This statistic shows that either ICOs are not delivering at all on their promised timelines or that their ICO stage of the project is purposely taking longer. Comparable data from 2017 suggests that, indeed, more time is being taken across the board to complete ICOs in 2018, indicating that they are not as rushed or poorly formulated. From the data above, one can see that 2017 had ICOs that predominantly planned to last between 10-30 days. However, in 2018, there was a broader division, with longer periods of time being prefered. In fact, where a 150 day ICO was unheard of in 2017, five percent of them in 2018 have chosen this route.

This has a lot to do with ICOs that are run in different stages becoming more popular. These teams initially have a pre-ICO, and then three or more stages of sales. In the current conditions of substantially increased competition, the duration of marketing preparations also increases.

There are also case studies that show that these elongated ICOs can be more successful — a project like EOS showing how it managed to accrue $4 billion over a year-long ICO.

Another trend that has come about in 2018 is the idea of first launching a private ICO and then opening it up to the public. Nearly 30-35 percent of tokens with large discounts — of up to 50 percent — will go to funds and angel investors. Projects use the money to fund pre-ICO campaigns, including marketing and social media advertising.

A good example of this is the Telegram ICO, which was so successful in its private ICO that it decided to cancel its public ICO due to the abundance in funds it raised initially.

Some others include Kodak Coin, which also went the private ICO route, raising $10 million in the presale. Coinlist collected over $9.2 million from some of the finance industry’s most prominent investment firms in its attempt to keep regulation friendly.

In fact, there have been reports that suggest 84 percent of all ICO fundraising this year has come from private and presales.

An evolving form of raising capital

Already — even though it is barely a few years old — we are seeing a change in the trend for fundraising through blockchain technology. Part of it has to do with the belief that the ICO space is in its own bubble and part of it is a general evolution in a fast-paced space.

The terminology is changing, as is the way in which these offerings are made. Companies as big as Overstock are leaning toward Security Token Offerings (STO), while other major crypto players, such as Vitalik Buterin, are proposing new forms of crypto crowd sales like DAICO, Interactive Coin Offerings or Continuous Token Models.

The STO is a token is backed by a real asset, profits or company revenue. Prime examples of this include the Venezuelan government’s oil-backed Petro coin. These coins are meant to operate more like traditional securities and to meet all the requirements of the SEC.

These STO tokens are seen as a step in the right direction because of their regulatory compliance at the start, and there is already a belief that they will be the dominant force in the near future when it comes to Initial Coin Offerings.

Security Token Offering (STO) is held when token is backed by real assets or profits or company revenue. These tokens are protected from speculations and scammers, more like a traditional security, but in electronic form. Moreover, such a token meets all requirements of the U.S. Securities and Exchange Commission (SEC), which allows it to completely legally implement the token sale in the USA. The first security token platform Polymath data shows that STO will prevail on the market by 2020 and will be more than $10 trl. Then there’s DAICO, which is a hybrid solution of ICO and DAO — a decentralized, autonomous organization, which is a form of a management management model based on blockchain technology. It allows a company to attract a solid investment, but at the same time provide investors with certain levers of management. It was Ethereum founder Vitalik Buterin who suggested this modification in order to improve ICO processing.

Interactive Coin Offerings are another option — which offer a protocol from creators Jason Teutsch and Vitalik Buterin — that suggests a different model of a crowdsale that ensures the certainty of valuation and participation at the same time.

Then there are Continuous Token Models. This model assumes that, “instead of pre-selling tokens during a launch phase, the tokens are minted as needed through various means. The tokens are then dispensed for services rendered in the network,” a Medium post describes.

Sorting out the scams

The data indicates that there are a few big problems with the ICO space in terms of not delivering on projects after investors have taken part in ICOs. This partly comes down to failed ICOs, but also down to a number of scams.

ICObazaar has a system of rating ICO projects that consists of a weight-adjusted formula with five factors — a sixth factor consisting of the actual score — which is all correlated by their blockchain and finance professionals. Their data shows some interesting trends. Firstly, they state that, in their rating system, only 7 percent of projects are rated above 4.5 out of 5.

The majority of the rest of the projects — up to 58 percent — score less than 4 out of 5. The reason for this, according to the site, is because of a “lack of information about the company and it’s team, as well as an unsatisfactory description of the product in the Whitepaper.”

“This usually happens when the team hurries to get listed on ICO trackers but doesn’t pay enough attention to their documentation, social media or the size and quality of community supporting the project.”

There is also data that shows better results in terms of ranking ICOs in 2018, as compared with last year.

Projects with ratings lower than 4 were even higher in 2017, with a large portion of projects having scores of 3–3.4. Thus, it shows that the share of high-quality projects has increased into 2018, ICObazaar’s data explained. We need to remember that ICOs, cryptocurrencies and the entire blockchain space is still very much in its infancy. And, just like we have seen things like Bitcoin evolve, with Segwit and even the emergence of Bitcoin Cash, ICOs will evolve too.

The changes will be geared toward security, transparency, and reliability, and a lot of that will be driven by harder regulations intended to protect investors. However, it will also continue to be a competitive space, and that competition will also drive the necessity for well-built projects.

ICOs may have become a bit of a dirty word, but the process still has a lot to offer. After a bit of tweaking and growing, there will be a lot that can be done in the ecosystem once it is functioning well.

This article originally appeared at: https://cointelegraph.com/news/from-2-9-billion-in-a-month-to-hundreds-dead-trends-of-the-rollercoaster-ico-market-in-18-months.